John Campion has told the tale often enough, but the impact is easy to understand: It’s Easter morning, in 1978, in a forest in southwestern Ireland. Suddenly, the quiet is split open by what looks like a flying wedge with four wheels on it, and it’s literally flying – catching air over the gravel – as it leads a parade of similarly outrageous rally cars through the woods.
Campion was 15 that morning, when his father had taken him to see local legend Billy Coleman and his Lancia Stratos compete in the Galway International Rally, and he was soon to begin a journey of his own, with about as many twists and turns.

By 1984, Campion was in the United States, with $25 in his pocket and a knack for informal engineering that was another legacy from his father. In fact, it was that skill that took him from being a rock-and-roll roadie – for artists the likes of David Bowie and the Rolling Stones – to becoming a successful entrepreneur and philanthropist. After developing ways to provide power at rock concerts, Campion began using the same kind of technology to bring emergency electricity to areas struck by natural disasters and other crises.

But running a billion-dollar company hasn’t blunted Campion’s enthusiasm for rally cars any. At the recent Concours d’Elegance of America, held near Detroit, he showed off part of his growing collection along with plenty of excitement over an interesting coincidence.

Also on hand from another collector was a certain Volvo 142 once driven by Finland’s Markku Alén, who won the driver’s title in the 1978 World Rally Championship. “That car there,” said Campion, pointing to the Volvo, “was driven by the same guy who raced my Lancia over there when it won a championship, and we just found out about it!”

Clearly, for Campion, it was like welcoming an unexpected relative to a family reunion. As for the rest of Campion’s rally-car family, it also features the following. 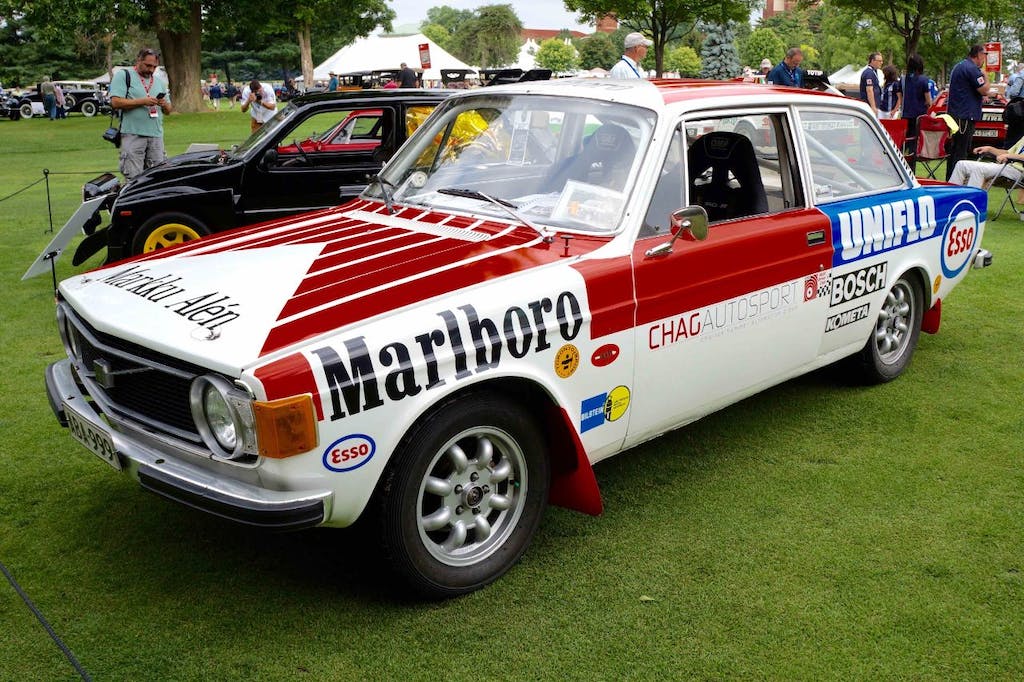 A Love for Lancias

Now living in Florida, Campion’s Irish roots run deep. For example, he’s a major supporter of the Team Ireland Foundation, which launched earlier this year in Dublin to help young Irish drivers with motorsports aspirations. Even his collection of Italian rally cars has an Irish influence, since it naturally boasts a 1975 Lancia Stratos – the same model that Campion saw with countryman Billy Coleman at the wheel some 40 years ago.

It’s not the exact same car, but Campion’s does have a winning pedigree, with numerous international victories in the late 1970s. The Stratos has an important position in the history of the sport, too. 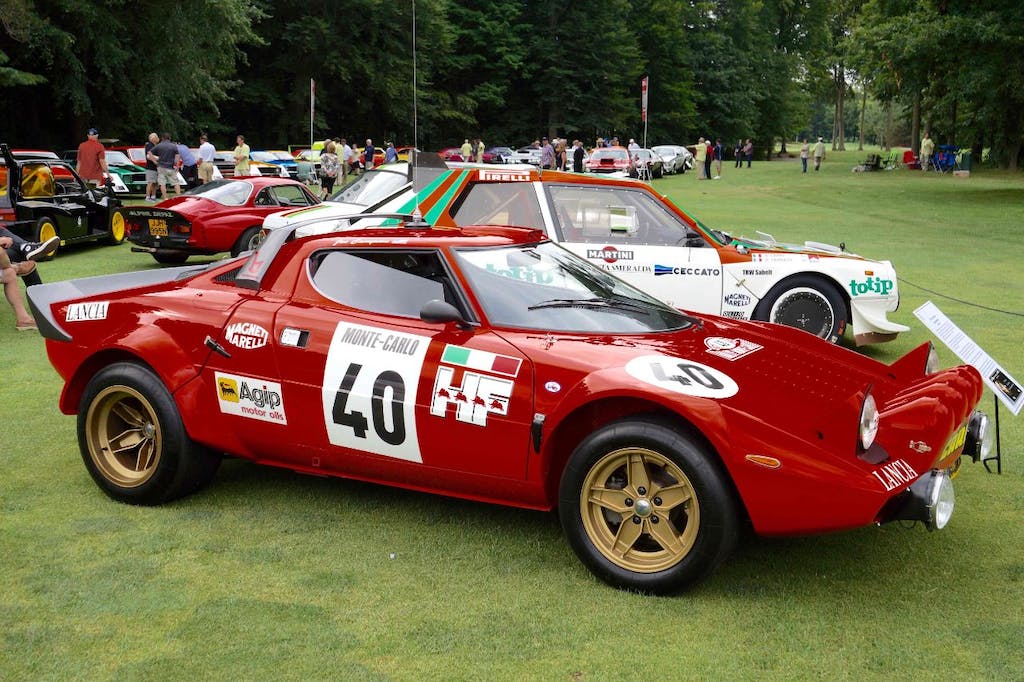 The World Rally Championship (WRC) had kicked off in 1973, and was attracting growing interest from both fans and European automakers. The fans loved to see modified sports cars going all out in all sorts of driving conditions, competing against the clock on closed courses covered in snow, dirt, mud and gravel. And the companies were eager to prove their metal against their rivals anywhere they could, often taking the competition from the rally courses to retail showrooms. There, they could rely on the same “win on Sunday, sell on Monday” approach still leveraged by automakers today.

Those factors came together in the Lancia Stratos, a low-volume production car created specifically to win the WRC championship. With an incredibly dynamic shape by Bertone – the same Italian design experts behind the Lamborghini Countach, among others – the Stratos also originally packed a Ferrari V6 that was mounted behind the driver for improved balance. (Lancia and Ferrari both have the same parent company, Fiat.)

The Stratos went on to win three consecutive WRC manufacturer’s championships, from 1974-76. Then, when the first championship for drivers was given, in 1977, it was earned by a Lancia Stratos pilot – Sandro Munari.

Group B: Boom to Bust

This may seem surprising, but despite the rally-focused mission of the Stratos, it did not feature four-wheel drive. Back then, four-wheel drive systems were both too heavy and too complicated for the sport. It wasn’t until 1980, when Audi introduced its first Quattro setup (in a car of the same name) that the technology reached the WRC. By 1982, the Audi Quattro was No. 1 in the manufacturer’s standings, and it had captured another, plus two driver’s championships, by 1984.

In 1982 the WRC reorganized its rally classes by dividing the series into three groups, each of which would have different restrictions regarding car modifications and production numbers needed to qualify. Group B allowed the most of the former and required the least of the latter, and for about four years, this division hosted some of the most incredible high-performance cars to ever compete in the WRC. 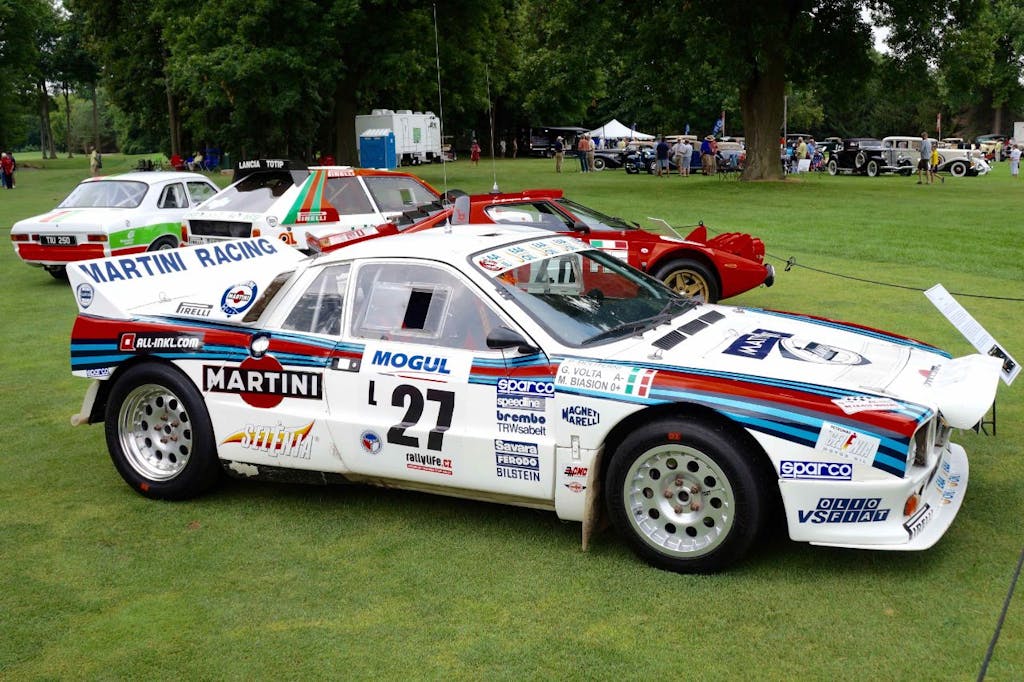 Case in point: Campion’s 1983 Lancia 037, which is the car driven by Alén en route to that year’s manufacturer’s championship. It is rear-wheel drive, and in fact, a different model would be the last rear-wheel drive car to win the WRC manufacturer’s title, also in 1983. But Lancia engineers were able to supercharge the racer’s 2.1-liter four-cylinder engine to deliver 325 horsepower in Campion’s car. That may not seem like much today, but because the Lancia was so light, it had a better power-to-weight ratio than a 526-horsepower Ford Mustang Shelby GT350.

Two years later, Lancia had incorporated all-wheel drive into the Delta S4. It also further emphasized weight savings and boosted output by installing both a supercharger and a turbocharger to a 1.8-liter power plant. The bottom line for Campion’s Delta S4: nearly 560 horsepower. Just imagine tearing through a narrow trail in the woods with that brute force behind you, especially when that path is lined with spectators.

Unfortunately, that situation led to inevitable and tragic results for Group B drivers. Early in the 1986 season, at the WRC event in Portugal, a driver swerved to miss one group of onlookers and crashed into another; three people died and more than 30 were injured. A number of drivers and navigators also lost their lives in Group B competition in 1985 and 1986, and the governing body that oversaw the WRC eliminated the class for the 1987 season.

The memories live on, as do the cars, thanks to fans like John Campion.