Catalytic Converters: What You Need to Know 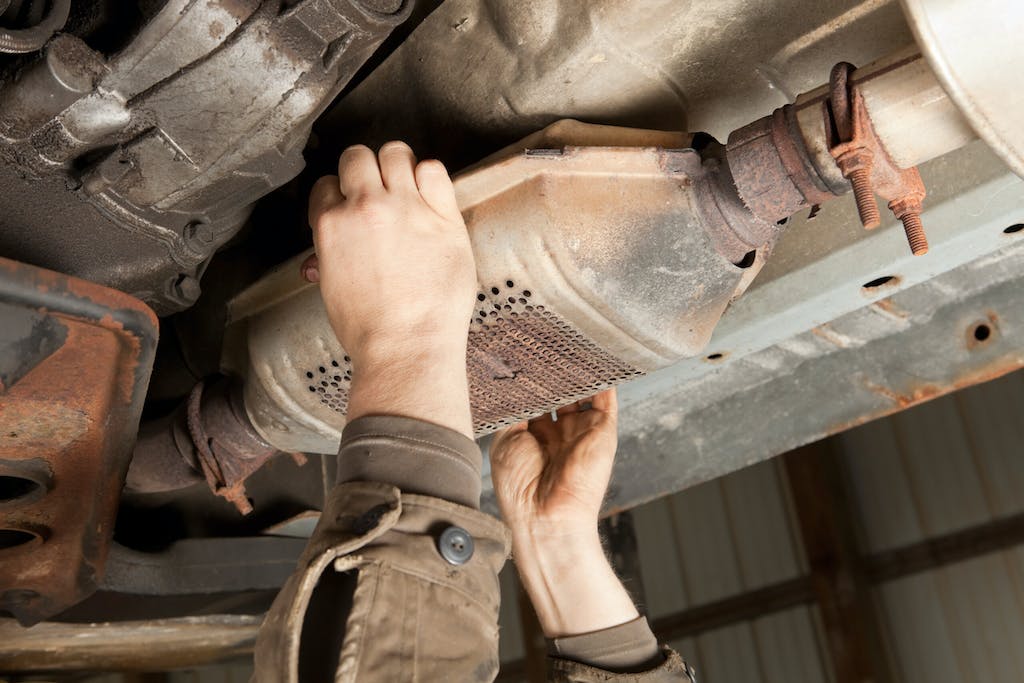 What Is a Catalytic Converter?

Catalytic converters are a key component of a car’s emissions system, reducing the amount of harmful pollution going out the tailpipe.

How Do Catalytic Converters Work?

Catalytic converters, which first appeared on U.S. vehicles in 1975, transform hydrocarbons, carbon dioxide, and nitrogen oxides – the bad stuff – into water vapor and carbon monoxide, the stuff we can live with.

Specific designs vary among manufacturers, but they typically look like mufflers and can be oblong or cylindrical. 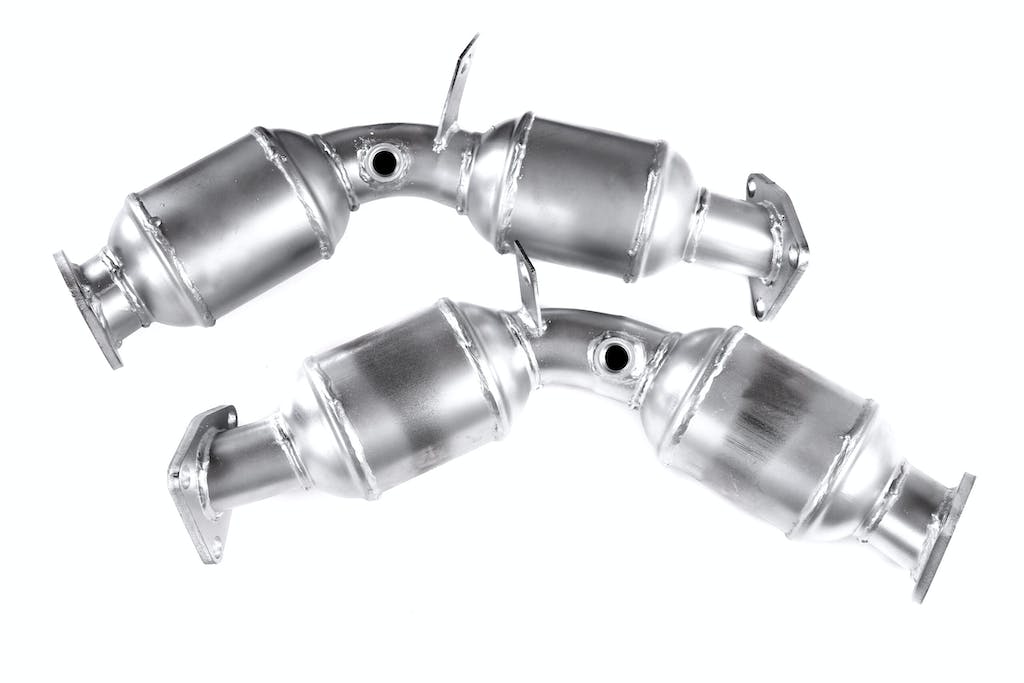 What’s Inside a Catalytic Converter?

Inside, there’s typically a piece of ceramic coated with various precious metals, including palladium, rhodium, and platinum, which are the “catalysts” that create a chemical reaction to convert the harmful gases into safer substances.

Where Is a Catalytic Converter Located on Your Car?

Catalytic converters are part of the exhaust system. They’re located between the engine and the muffler, usually closer to the engine. This helps them warm quickly to the high temperatures where they’re most effective.

Most of the pollution modern cars emit occurs in the first couple of minutes after a cold start, before the engine and the catalytic converter have reached their optimum temperatures.

Catalytic converters can overheat when excessive amounts of unburned gas come through the exhaust because of a misfiring spark plug, leaky exhaust valve, or other fuel-system problem.

Overheating can damage the materials inside, reducing engine performance and usually triggering the check engine light.

Looking for a Used Car? Every Carfax Used Car Listing Comes With a Free Carfax Report

Catalytic converters also can become clogged over time from carbon buildup. Oil and engine coolant also can clog a catalytic converter and restrict the flow of exhaust gases. When less gas is able to exit the exhaust, then less air is able to enter the engine, causing sluggish acceleration or stalling. Signs of a clogged or damaged “cat” include the smell of rotten eggs or sulfur, or excessive heat from underneath the vehicle.

Most converters are tucked out of harm’s way from road hazards, but on some vehicles, they can be damaged by debris or running over a parking barrier. 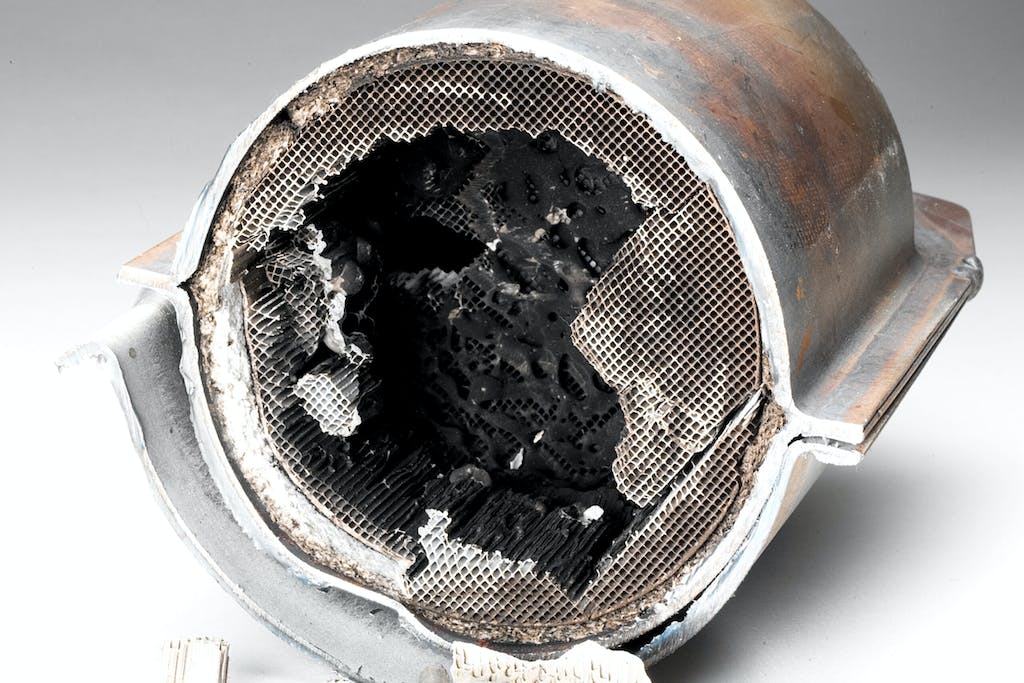 Can You Clean or Fix a Catalytic Converter Without Replacing It?

No vehicle manufacturer recommends cleaning a catalytic converter, whether to remove clogs or as preventative maintenance to remove carbon and other crud that has accumulated. Most repair shops don’t recommend or perform cleaning.

There are several cleaning products available that claim to remove clogs. You pour the solution into the gas tank and let it work its way through the fuel and exhaust system. These products may be able to reduce minor clogging that is at a level that doesn’t trigger the check engine light or cause a significant loss of acceleration. They are unlikely to clean out serious clogging, however.

Some mechanics recommend removing the converter and soaking it in a degreaser and water to remove clogs, and others say lacquer thinner does the trick. Neither is likely to restore the performance of a faulty converter to like-new condition.

Before you spend hundreds of dollars or more on a new converter, these inexpensive cleaning products might be worth a shot. But if a diagnosis by a qualified technician finds that the catalytic converter is seriously clogged or damaged by overheating, there is no magic potion that can fix those problems. The converter should be replaced.

How Much Does a Catalytic Converter Cost to Replace?

In most cases, the new “cat” will account for most of the cost because removing the old one often just requires unfastening some bolts. That, however, is a best-case scenario.

As with other exhaust components, rust can make removing a catalytic converter extremely difficult. On some vehicles, the “cat” might be hard to reach or require removing other parts first, adding to the labor cost. And on some, the converter is welded in, requiring more work – and more money out of your pocket.

Adventurous DIYers willing to tackle the job can save on labor and the price of the part. Here are prices for new converters from a national parts store for a handful of 2010 model-year vehicles (other parts also may be necessary in some cases):

How Long Does a Catalytic Converter Last?

Catalytic converters typically last at least 10 years. Many people who keep their cars longer have never had to replace one.

However, in addition to the potential issues mentioned above, corrosion, contamination from bad gas, repeated short trips that don’t allow the “cat” to reach full temperature (allowing moisture to collect and cause rust), and other factors can shorten the expected lifespan.

Why Do People Steal Catalytic Converters?

Catalytic converters often don’t get replaced just because they overheat or get clogged – they’re often stolen, especially on older versions of popular models such as the Honda Civic and Toyota Camry.

Car thieves know there is strong demand from repair shops and individuals looking to save money on replacement parts, especially on older vehicles, on which owners are reluctant to spend big money on a car with low resale value. The same is true for body parts for popular models from several years back. Shady repair shops might also buy stolen parts but bill their customers for a new one at a much higher price, figuring the customer will never know.

“Cats” are also stolen for another reason: The precious metal that’s inside – the palladium, rhodium, and platinum that are the catalysts.

Platinum, for example, was recently trading at $944 per ounce, and palladium was at about $2,190 an ounce. Rhodium – fasten your seatbelts for this one – was going for nearly $10,000. Yes, $10,000 per troy ounce. In comparison, gold was a mere $1,940 per ounce. Prices fluctuate greatly and frequently, so those numbers are subject to change.

These metals are so expensive because there is high demand and limited supply globally, which is why gold is being explored as an alternative for the future.

How Much Platinum Is in a Catalytic Converter?

How much of these precious metals reside in a specific catalytic converter varies, but many current models have only 6 or fewer grams of all three combined (there are 28.35 grams in an ounce). Depending on how much of each metal there is, their value could be as little as $200 or more than $1,000, so there is some real value hidden inside catalytic converters.

About the Author: Rick Popely

When I began covering the auto industry you could still buy cars with carburetors, and SUVs accounted for less than 5% of the new-vehicle market. Along the way I served as automotive editor of Consumer Guide for more than 15 years, as an auto writer for the Chicago Tribune for eight years and as a freelance writer for several more, contributing to newspapers, Reuters, Automotive News, Cars.com and others. I have an on-again-off-again interest in racing that during an “on” period led to an opportunity to write a history of the Indianapolis 500. If it’s warm enough in the Chicago area, I’m probably playing golf in my free time or watching White Sox games.

Note: Most of these deals are manufacturer-sponsored offers on certified pre-owned (CPO) cars. Availability may vary by dealer. Best Used Car Deals by Finance Rate Used Car Deals With 0 APR Financing Infiniti is offering 0% financing for 36 months on all 2015-2020 Infiniti CPO models. Lexus has 0% financing…