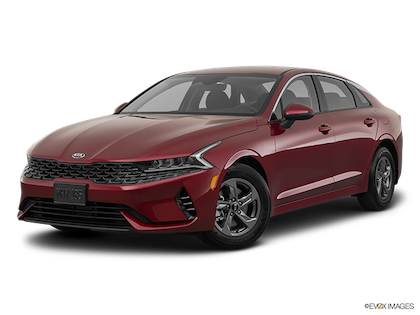 What Is It and Who Is It For?

The K5 is a midsize sedan that seats up to five people. It’s meant for drivers who might otherwise choose a rival such as the Honda Accord, Toyota Camry, Volkswagen Passat, Hyundai Sonata, and Mazda6.

What Makes it Unique?

If a picture speaks a thousand words, we’ll let the shape of the Kia K5 do lots of talking. The K5 might look like a hatchback, especially when viewed from the side, but the slippery silhouette is draped over a traditional four-door body with a conventional trunk opening.

The front end is aggressive; the grille and headlights give the K5 a forward-thrusting scowl. Like the Hyundai Sonata, with which the K5 shares a platform, this is a sedan that’s been bred to have more style and attitude than other mainstream cars and SUVs.

Kia has added more comfort and tech touches to the K5, including wireless Apple CarPlay and Android Auto, wireless smartphone charging, and an optional 10.25-inch touchscreen.

K5 vs. Other Kia Models

Despite the ongoing sales rush to all things SUV, Kia has six sedans in its current lineup. These range from budget-friendly choices, like the Rio and Forte, to the sporty Stinger and luxurious Cadenza and K900.

In terms of size and price, the K5 sits between the compact Forte and Stinger sports sedan. Of the two, the K5 has more of the Stinger’s styling swagger, though not its potent 365-horsepower twin-turbo V-6.

Despite being far from the newest midsize sedan on the block, the outgoing Optima more than held its own against a wide range of strong rivals. The new model adds a dash of exterior bravado with its bold new look. This helps to not only set the K5 apart from other sedans; it gives the four-door Kia an edge against more pedestrian-looking SUVs:

Honda Accord: Agile, with a roomy backseat and ample cargo room

The K5 adds to the solid foundation of the Optima by offering all-wheel drive (AWD), added tech features such as wireless smartphone charging, and a more powerful turbo 4-cylinder in the new GT trim level.

What the K5 keeps is Kia’s outstanding warranty, a long list of standard safety and comfort features, plus an interior that provides ample space for those seated in the front or rear. In fact, because the K5 is slightly longer and wider than the Optima, Kia has managed to carve out a little added interior room, too.

Research the Kia Optima from other model years

Kia will reveal exact pricing for the 2021 K5 closer to its official on-sale date this summer. The GT model arrives later this year:

The Optima was known for offering a healthy dose of standard safety and comfort features, and the 2021 Kia K5 is not going to stray from that script. While Kia has not announced any official pricing details at the time of writing, the K5 should stay relatively close to the price range of the Optima. This would mean an entry-level LX would start around $25,000, while the range-topping GT trim will hover somewhere around $33,000-$35,000.

The most tempting trims seem to be right in the middle of the K5 range. Both the LXS and sport-themed GT-Line come with the standard 180-horsepower turbo-four, plus a choice of front- or all-wheel drive. Having this added all-season grip could help convince car shoppers to skip the SUV and give Kia’s bold new sedan a test drive.

180-horsepower turbocharged 1.6-liter 4-cylinder with an 8-speed automatic transmission and FWD or AWD

Good for the class? The base engine in the K5 isn’t as powerful as what you’ll find in the Accord or Camry, but the optional 2.5-liter turbo more than holds its own, at least where horsepower is concerned.

Kia has killed the Optima – long live the K5! Despite the name change, and the sleek new look, the K5 retains many of the Optima’s best qualities, including roominess and ride comfort. Only a jerky transmission detracts from the experience. We drove one for a week, and these are our impressions.

I own a 2015 Kia Optima, and I love driving it, even given its age. It’s very quick off the line, has a firm but comfortable ride, and is very roomy for a larger guy like myself.

The new K5 gets a transmission that I think is meant to be more “refined,” meaning that it eases into its acceleration, especially from a stop. However, when driving at low speeds, that means it has to hunt for the right gear. At one point, the car “slammed” into second gear, giving us quite a jolt. It could be because it’s in its first model year, but it’s definitely less enjoyable than the older model.

The K5’s handling is at least as good as the old Optima’s was, and that was average among midsize sedans. The steering is only fairly responsive, but there’s virtually no body lean, which gives drivers confidence when taking sweeping freeway ramps.

This is where the Optima shone. The K5 continues that tradition, and improves upon it. The front seats are very comfortable, even on long road trips, and the rear seats have plenty of legroom and headroom for taller adults. The finishes throughout the cockpit are very nice, bordering on premium.

The K5 has a refined ride; it’s firm enough that drivers know what type of road they’re traversing, but it absorbs bumps and dings without too much of that energy permeating the cabin.

Not much wind and engine noise get into the cabin, but the tires sometimes do radiate noise, especially on concrete roads.

The K5 has impressively updated technology, with a slew of standard advanced driver-assist systems (ADAS), including adaptive cruise control with stop-and-go functionality, automatic emergency braking, and blind spot warning. In fact, there are quite a few of these systems for a car that starts at around $24,000; some luxury cars don’t have these features as standard, and some don’t even offer them as options.

The coolest feature to me is the slot reserved for your smartphone, just in front of the center storage bin. It has a trap door that hides the phone, so it’s close but out of the way. Wireless charging is built into that slot, so the phone can recharge while it’s in there. Pretty nifty!

The K5 has a 10.25-inch-wide touchscreen, but unfortunately, it doesn’t give over the entire screen to Apple CarPlay if you use it. It maintains a second screen for another data point. It would be better if you could see more of the CarPlay navigation map.

Not ready for a new vehicle? Find a used Kia Optima (the K5’s predecessor) or a different used car

Neither the National Highway Traffic and Safety Administration (NHTSA) or Insurance Institute for Highway Safety (IIHS) has carried out crash tests on the 2021 Kia K5 as of this writing.

The previous generation Optima sedan scored the coveted Top Safety Pick+ award from IIHS, with scores of Good (the highest possible score) in all crash tests.

NHTSA gave the outgoing Optima a perfect five-star overall ranking in its own series of crash tests.

Good for the class? The Kia K5 offers an impressive level of standard and available comfort and tech features.

Good for the class? This is average for a midsize sedan.

Good for the class? There is room for 5 people aboard the 2021 Kia K5 sedan. The previous Optima was notable for offering plenty of legroom for front and rear occupants. With its slightly longer length and wheelbase, Kia has been able to slightly increase front legroom in the K5. Rear legroom remains nearly identical to the outgoing Optima.

Good for the class? Kia’s warranties are excellent among the midsize sedan segment. 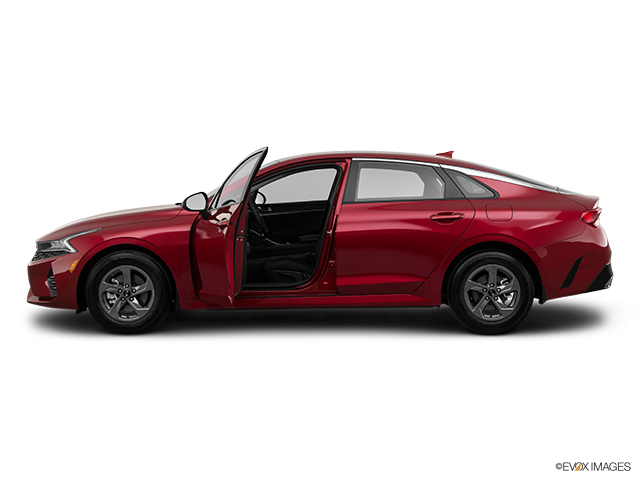 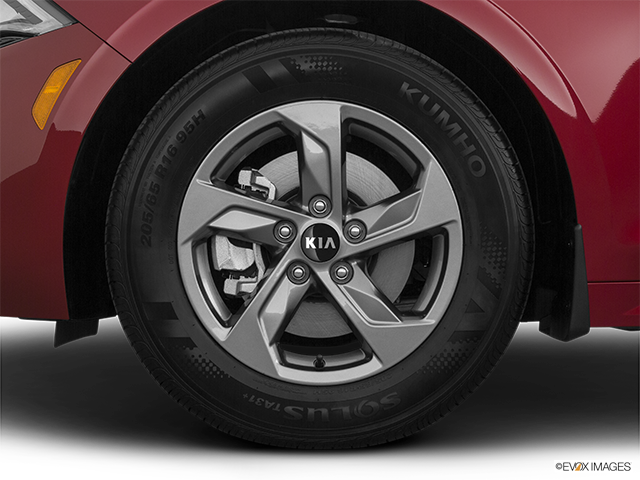 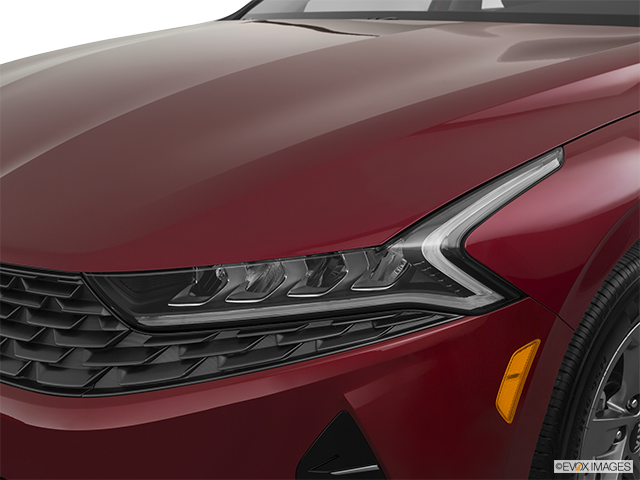 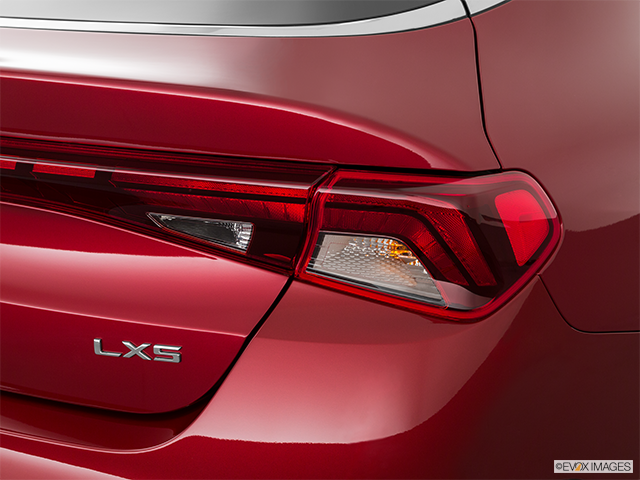 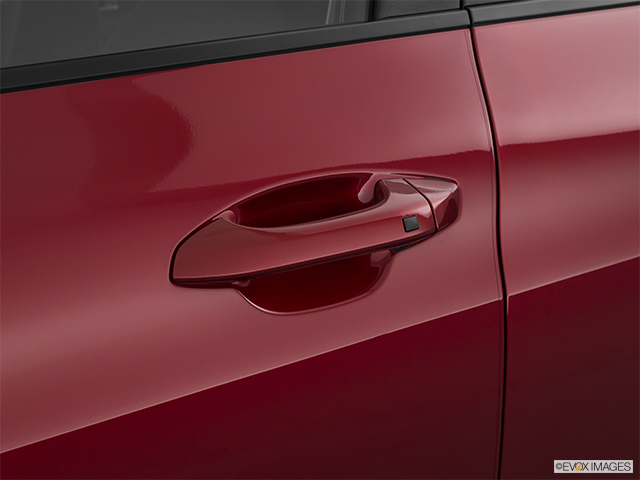 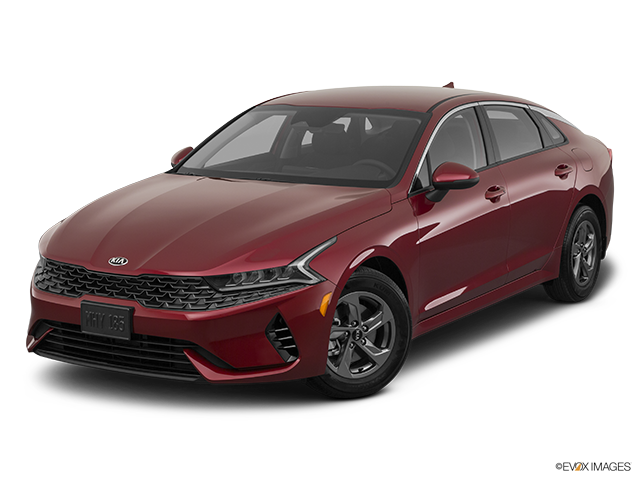 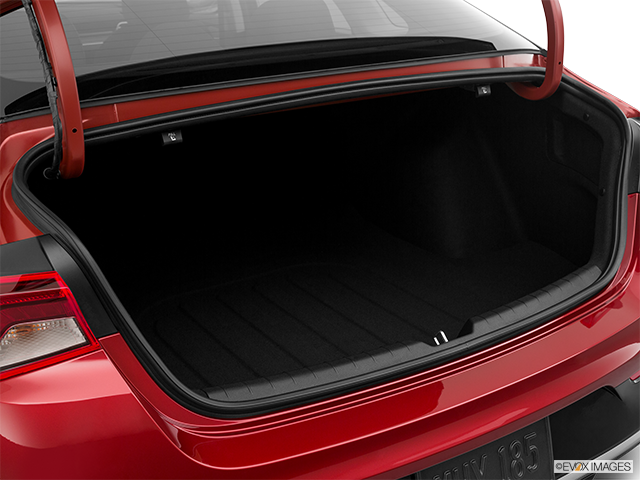 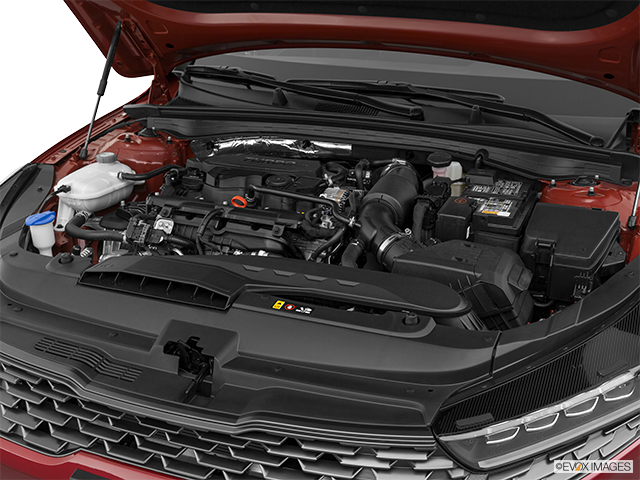 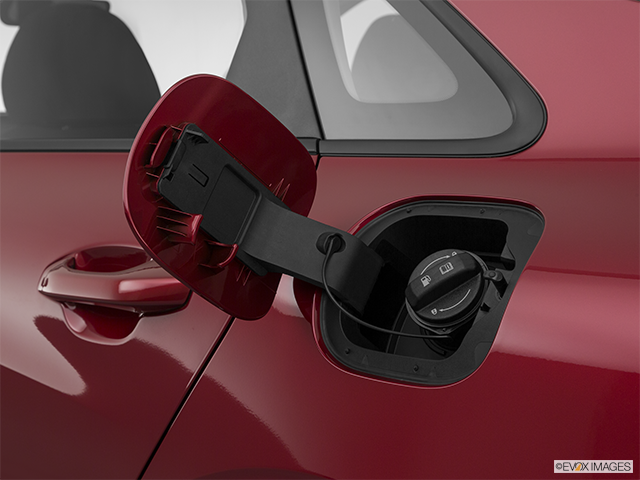 * IIHS rates vehicles Good, Acceptable, Marginal or Poor
The 2021 Kia K5 has not been tested

CARFAX offers millions of used cars for sale nationwide. Every listing includes the vehicle history. The data below is updated daily, based on used car inventory for sale on CARFAX.
2021 Kia K5 Deals on CARFAX
Percentage of 2021 Kia K5 for sale on CARFAX that are Great, Good, and Fair Value deals. Values are determined by whether the selling price is above, below, or the same as the history-based CARFAX Value.
Great Value
(11)
Good Value
(10)
Fair Value
(16)
No Badge
(11)
VEHICLE HISTORY SUMMARY
The Vehicle History Summary represents the percentage of cars available for sale on CARFAX that are reported to have no accidents or damage, had 1-owner, been used as a personal or personal lease car, and/or have service history information.